For centuries, there is a thatched roof and thanks to new techniques and materials, it is still in development. There are two different structures:

• The traditional open construction with the reed on slats bound;
• The closed structure (the schroefdak), here the reed is screwed onto a closed sub-structure.

Reed Decks always follows the same system. The difference between the thatched roofs lies, therefore, in the sub - structure of the house. There are over two years kinds roofs arise where the reed on can be covered. The first construction is the traditional hood which consists of a framework of slats and beams. The reed is attached to the slats, by means of a thread, which is beaten to the crossbar. It is an open structure in which the reeds from within remains visible. Whether the beams are finished on the inside with, for example, a gypsum board.

The cavity between the beams remains. The second construction is the schroefdak. This construction is made up of beams that are covered by plates of wood of 18 mm thickness, or an isolated screw roof panel. Thus, it is a closed construction. The reed cover takes place at a schroefdak in the same manner as in the conventional roof. The securing of the reed is now done only with a screw to which a wire is attached. From inside one sees no more cane in schroefdak but wood panels or insulation panel. 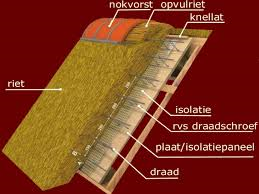 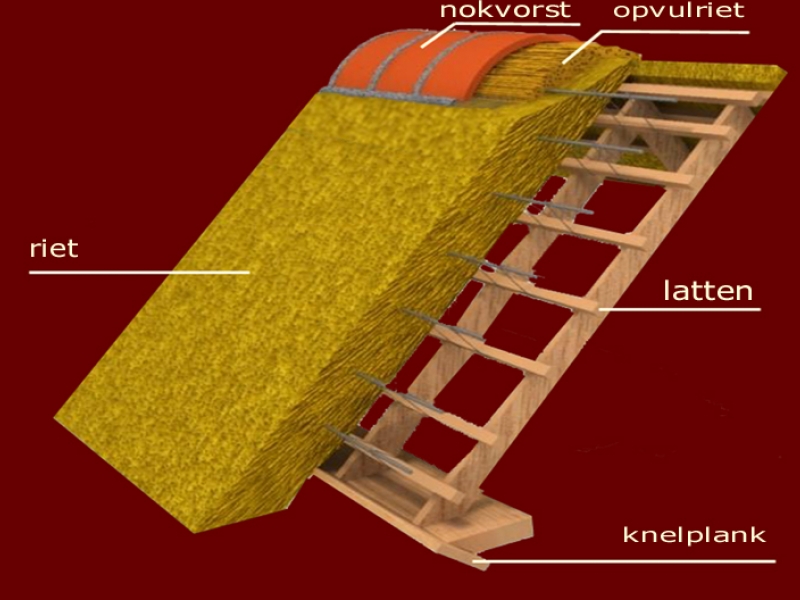